Your Comprehensive Guide to the Many Different Forms of Birth Control 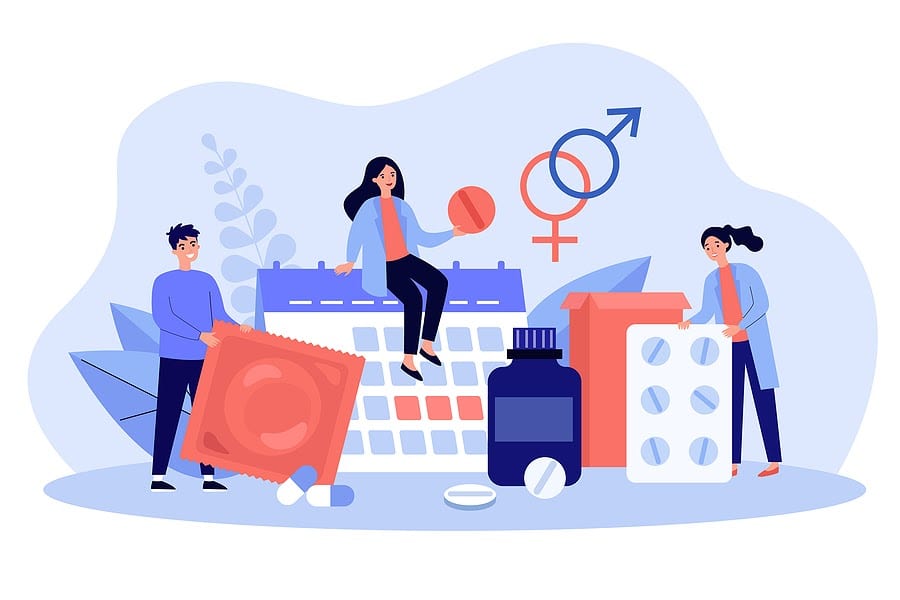 In the modern age of the 21st century, our society is quite lucky to have a number of different methods of birth control at our disposal. While some methods require physical tools and others require medication, one thing is always required to ensure birth control remains effective: a comprehensive understanding of how birth control works and how to use it properly.

Before we get into the nitty-gritty however, let’s clear up a few common questions surrounding birth control use during perimenopause or menopause:

Q: Can I Stop Using Birth Control in Menopause?

A: Medical and fertility professionals usually recommend that women continue to use some form of birth control for the first two years following their last period. Certain methods, however, like the patch, pill, or ring, are not recommended after women enter their mid-to-late 40s. In this scenario, condoms, intrauterine devices (IUDs), or vasectomies among your partners are recommended.

Q: What Are the Benefits and Risks of Continuing to Take Birth Control Pills During Menopause or Perimenopause?

A: While there can be some benefits to continuing the use of oral contraceptives, such as period regulation and a reduction in bleeding or pain, and their role in keeping your hormones at consistent levels. However, every woman’s situation is different, and there are sometimes risks associated with taking the pill during menopause. Consult with your health care provider for help deciding what’s best for you.

Q: When Should I Start Talking to My Doctor About Perimenopause and Menopause?

A: It’s really never too early to get yourself informed about what lies in store for your reproductive future, but many women choose to begin seeing their health care provider with questions concerning menopause only after they begin to experience their first symptoms. That said, if you begin to experience symptoms that are concerning, like excessive pain and heavy or irregular periods, be sure to contact your doctor as soon as possible.

Without further ado and courtesy of Renewed Vitality, here are 18 methods of birth control, their level of effectiveness, their cost, and their expected longevity.

The birth control implant, or “Nexplanon,” is a tiny, thin rod (about the size of a matchstick) that releases hormones into your body that prevent you from getting pregnant. A nurse or doctor inserts the implant into your arm and that’s it — that’s all there is to it.

Potential Cost: Between $0 and $1300 depending on insurance coverage

An Intrauterine Device, or IUD, is a tiny device that’s inserted into your uterus to prevent pregnancy. It is long-term, reversible, and one of the most effective birth control methods out there. Some IUDs do not use hormones, while others do. They work by changing the way sperm cells move, preventing them from effectively reaching and fertilizing an egg.

Potential Cost – Between $0 and $1300 depending on insurance coverage

The birth control shot, also known as the “depo shot” or “Depo-Provera,” is an injection you get once every 3 months. It’s a safe, convenient, and private birth control method that works really well if you always get it on time. It works through the use of the hormone progestin, which stops you from getting pregnant by preventing ovulation.

Potential Cost – Between $0 and $150 depending on insurance coverage

The birth control ring (AKA the “vaginal ring,” or simply “the ring”) is a small, flexible ring worn inside the vagina. It prevents pregnancy 24/7 by releasing hormones into your body that stop sperm from joining with an egg.

Potential Cost – Between $0 and $200 depending on insurance coverage

The birth control patch, or “transdermal contraceptive patch,” is a patch worn on certain parts of your body. It releases hormones through your skin that stop ovulation and prevent pregnancy. In addition, the patch thickens the mucus on your cervix, which helps to block sperm from swimming to an egg.

Potential Cost – Between $0 and $150 depending on insurance coverage

The birth control pill, also known as simply “the pill,” is a kind of medicine that uses hormones to regulate your ovulation cycle. Birth control pills come in a pack, and you take one pill every day. The pill is one of the most popular forms of birth control, and is safe, affordable, and effective as long as you always take your pill on time.

Potential Cost – Between $0 and $50 depending on insurance coverage

Condoms are an extremely popular form of barrier-method birth control. They are thin, stretchy pouches worn on the penis during sex. Condoms provide great protection from both pregnancy and STDs, are easy to use and easy to get, and come in many different forms.

Internal condoms — also called “female” condoms — are an alternative form of barrier-method birth control. They work in a similar manner to traditional condoms to offer protection from pregnancy and STDs. What’s different about them? Instead of going on the penis, internal condoms go inside your vagina for pregnancy prevention.

A diaphragm is a type of barrier-method birth control. It comes in the form of a shallow, bendable cup that is inserted inside the vagina. It covers your cervix during sex to prevent pregnancy, though it does not protect against STDs. For best results, it should be used with spermicide (a cream or gel that kills sperm).

Potential Cost – Typically between $0 and $75 depending on insurance coverage

The birth control sponge (aka the contraceptive sponge or “the sponge” for short), is a small, round sponge made from soft, squishy plastic. It is inserted deep inside the vagina before sex, and works by covering your cervix to prevent pregnancy. It also contains spermicide to help prevent pregnancy.

Rate of Effectiveness: Between 76 and 88 Percent

Potential Cost – Typically between $0 and $15 depending on insurance coverage

A form of non-hormonal birth control, spermicide is a kind of birth control that uses chemicals to stop sperm from reaching an egg. It is inserted in the vagina before sex to prevent pregnancy. You don’t need a prescription to get spermicide — you can buy it over-the-counter at most drugstores, pharmacies, and superstores in the condom aisle. However, there is a new kind of vaginal contraceptive gel called Phexxi. Phexxi isn’t a spermicide, but you use it in a similar way — you put the gel in your vagina before sex, and it helps stop sperm from meeting with an egg. You need a prescription from a nurse or doctor to get Phexxi.

Rate of Effectiveness: Between 72 and 86 Percent

Potential Cost – Typically between $0 and $270 depending on insurance coverage

A cervical cap is a little cup made from soft silicone and shaped like a sailor’s hat. As the name suggests, it works by being inserted deep inside your vagina to cover your cervix, preventing sperm from being able to join with an egg. Like diaphragms, it should be used in conjunction with spermicide for maximum effectiveness.

Rate of Effectiveness: Between 71 and 86 Percent

Potential Cost – Typically between $0 and $90 depending on insurance coverage

Fertility awareness methods of birth control, or “FAMs,” are ways to track your ovulation so you can prevent pregnancy. FAMs are also known as “natural family planning” methods or “the rhythm method.” You use it by keeping careful, detailed track of your fertility cycle in order to best gauge the safest time to have sex without getting pregnant.

Rate of Effectiveness: Between 76 and 88 Percent

Potential Cost – Typically between $0 and $20 depending on materials used

Believe it or not, breastfeeding can also be used as a form of natural birth control, but only when done in a certain way. When you exclusively breastfeed — meaning you nurse at least every 4 hours during the day and every 6 hours at night, and feed your baby only breast milk — your body naturally stops ovulating. You can’t get pregnant if you don’t ovulate.

Expected Longevity – Breastfeeding must occur every 4-5 hours and on a regular schedule to be effective in preventing your body from ovulating.

The definition of abstinence is not having sex whatsoever. Outercourse is defined as other sexual activities besides vaginal sex. Sexual abstinence and outercourse can mean different things to different people, but it is effective in preventing pregnancy only because pregnancy is not virtually possible without sexual activity or medical intervention.

Rate of Effectiveness: The only 100 percent effective form of birth control

Expected Longevity – As long as you do not engage in sexual activity and do not seek other means of intentional fertilization, pregnancy is virtually impossible.

Want to make sure pregnancy is not in your future? Tubal ligation (sometimes called “female sterilization” or “getting your tubes tied”) is a safe and effective surgical procedure that permanently prevents pregnancy in most cases. Because this procedure is designed for permanent effectiveness, it should only be considered if you are 100 percent certain you never want to get pregnant or get pregnant again.

Potential Cost – Between $0 and $6000 depending on insurance coverage

A Vasectomy — also called male sterilization — is a surgical procedure performed on the male anatomy that is designed to protect against pregnancy permanently. Vasectomies are meant to be permanent — so they usually can’t be reversed. You should only get a vasectomy if you’re 100% positive you don’t want to be able to get someone pregnant for the rest of your life.

Potential Cost – Between $0 and $1000 depending on insurance coverage

At Renewed Vitality, we pride ourselves on keeping our clientele healthy, happy =, and well-informed about reproductive and hormonal health. We specialize in helping people get their lives back and achieve their dreams.

We are the Berks County area’s premier facility for hormone replacement therapy (HRT) and other treatments. We serve both men and women, offering safe, effective care that relieves hormone imbalance symptoms and restores quality of life for patients at all stages of life. To learn more, don’t hesitate to contact Renewed Vitality in Wyomissing, PA today!

New Year’s Resolutions and How to Stick To Them

Benefits of a Dry January